Two days ago on July 24, 2012, I noticed an unusual amount of activity right outside of my hive.  Maybe for someone else’s hive this would be perfectly normal, but for my struggling colony, seeing so many of my bees flying right at the entrance was something different. 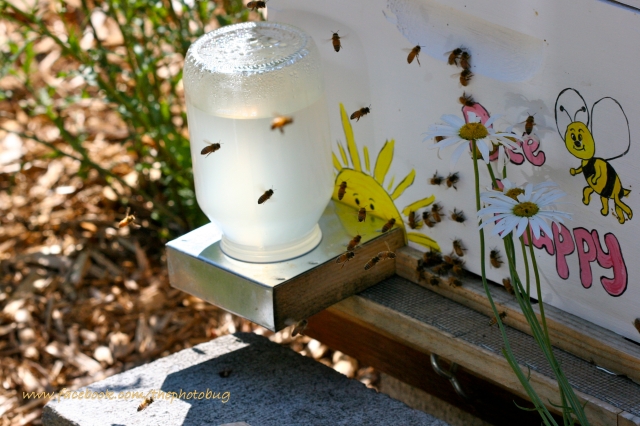 What was encouraging for me in observation of this behavior was that I’d seen it before…on the day I photographed my new virgin queen taking off on her mating flight.  Could it possibly mean that she had returned?

If you’re following along with my posts, you’ll know I looked in the hive this day and tried to find some evidence of the queen’s presence.  I found that my workers were building lots of comb.  So much comb that the queen could certainly hide underneath where it was built out away from the frame (yes I need to work on my frame-spacing and get it jiving with “bee-space” so this doesn’t happen).   I didn’t see eggs, but I saw cells filled with a clear-ish jelly-like substance.

Somewhat disappointed, I closed the hive up that day and yesterday, I returned to take another look.  The sun was out and it was warm, but one thing was different.  There weren’t as many bees flying around the entrance, as there had been the day before.  Hmmn…could something have changed in the course of a day?

With my box of supplies handy (I had my veil, camera, magnifying glass, hive tool, and gloves), I opened up the hive for another look.  Carefully, I disengaged a frame, trying hard not to damage the wax the bees had built that now connected it to the adjoining frame.  Holding it up to the light, I got out my magnifying glass and slowly looked into the uncapped cells I found to see if there were eggs.  I didn’t see any, so I took off my veil to try and get a better look.  My hair wasn’t pulled back and kept falling right onto the poor little bees that were trying to stay on task.  I worried at first they might become defensive, but you know, they just kept right on doing what they were doing.

After checking that frame thoroughly, I walked back over and returned it to the hive and chose the one next to it.  This was going to be my lucky frame.  Guess what I saw?  Yes, there she was!  Ecstatic, I grabbed my camera with one hand and kept one eye the whole time on my queen, crawling across the frame and backing her abdomen into cells one at a time.  Even better!  She’s laying eggs.  Snapping away, I took enough photos to post so you can see too.

After all the excitement, I VERY carefully returned the frame she was on to the hive.  I was so careful!  Gently lowering it all the way in so as not to accidentally squish her or knock her to the bottom, I returned her to her castle.  She was beautiful!  Perhaps now there is hope for these little gals to recover their population enough to see me through the winter here on the island.  I am in awe of their tenacity for survival in spite of the hardships they’ve faced.  They’ve endured the loss of three queens (I’m counting that one that flew away before I even put her in the hive), varroa mites, deformed wing virus, too many drones, and dreadfully cool summer weather.  I’m rooting for them though…and hope you will too!

Leaving the queen to do her thing for the next week or so.  “Bee” back soon with an update!

surrounded by her loyal subjects! 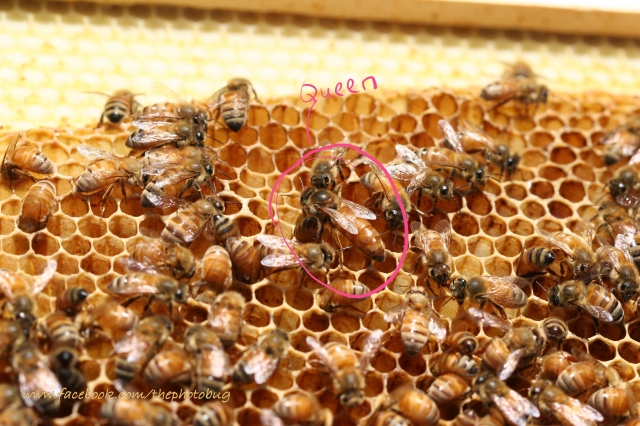 Home in the hive!

I love beetles and keep bees! In my free time, I enjoy photography (mostly bugs) and documenting insect species found on San Juan Island. I have limited availability for local, onsite beekeeping consultation and hive inspection, honey bee removal/swarm collection as well as phone/skype consultation. Contact me at cynthiabrast@icloud.com Member Washington State Beekeepers Association
View all posts by "BUGGING" YOU FROM San Juan Island →
This entry was posted in Uncategorized. Bookmark the permalink.