Last week I went out to do a consult for someone needing a little help with their beehive. They needed help finding the queen and wanted a general assessment as to the health of their colony.

The first thing I noticed was the pattern of the comb drawn out on the upper super.  Sometimes if there is a violation of bee space, they build comb contrary to our sense of order and this is what you get:

This is fairly easy to fix as you can just trim the comb off and adjust the frame spacing so they can start over.  Maybe the bees won’t be too happy about this, but it will make it easier for you to see what’s going on if the comb is drawn out evenly across the foundation.

Next, I found a queen cell.  It hadn’t been opened and was near the top of a frame in the super above the deep bottom super.  My client reported that earlier in summer, while on vacation, her bees swarmed.  She was concerned about crowding again and wanted to know what to do. 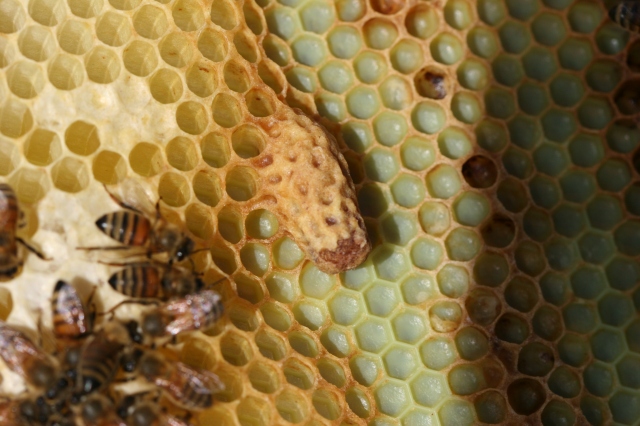 Her colony didn’t look crowded though and the frames in the upper boxes still had plenty of room, so this cell could be an indicator that her existing queen is failing, or it just might be left over from the supersedure earlier in summer.

After examining the rest of the frames, I think the queen cell could just be scraped off.   The brood pattern looked good.  There were healthy-looking uncapped larvae and capped brood, indicating the queen was laying well. 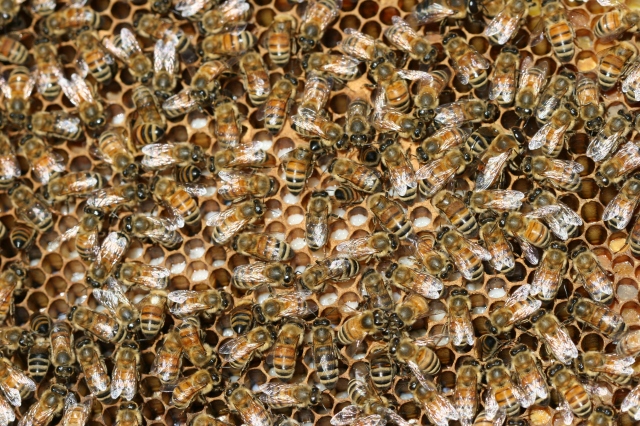 Overall, the colony health appeared great.  I didn’t find any indication of varroa mites, but if you see them at any time, my recommedation is Hopguard strips.  As far as the hive population, I’d have to say that in spite of a reported swarm earlier in the season, this colony was thriving.  I found the queen on about the 3rd frame pulled out of the deep super on bottom and she looked good.  This was a colony of Italian bees and in my experience, they are so gentle and easy to work with that inspecting them that morning was a piece of cake.

Recommendations?  Trim the irregular comb, keep an eye on the queen cell or cut it off, and continue to assess the laying pattern of the existing queen.  I might put a fondant across the frames on the bottom super (just above the bees) as they begin to ball up as temperatures dip later in the fall, but I expect these gals will overwinter just fine.

I love beetles and keep bees! In my free time, I enjoy photography (mostly bugs) and documenting insect species found on San Juan Island. I have limited availability for local, onsite beekeeping consultation and hive inspection, honey bee removal/swarm collection as well as phone/skype consultation. Contact me at cynthiabrast@icloud.com Member Washington State Beekeepers Association
View all posts by "BUGGING" YOU FROM San Juan Island →
This entry was posted in Uncategorized. Bookmark the permalink.