A new friend and fellow beekeeper came over yesterday to assist with my hive check.  It was great to have an extra pair of hands and eyes to search for the elusive queen.  I had looked for her unsuccessfully two days earlier after noticing an unusual population of drones emerging.

Less than four frames were drawn and they were about half and half with capped drone and worker brood.  There were plenty of cells open where bees had already emerged.  I’ve seen good activity these past few weeks with workers coming back loaded with pollen. Some worker bees are coming back with bright orange pollen.  I wish I knew what plants they might be visiting.  However, in spite of this, intuition and observation was telling me to be concerned over other recent worker behavior. 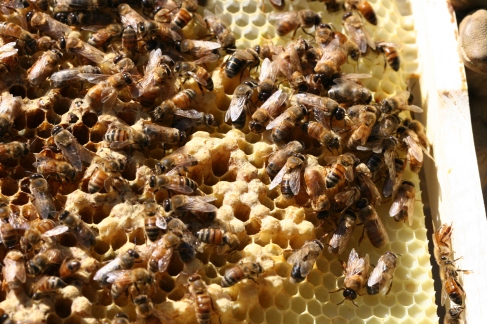 My workers were expending all their energy removing these drones from the hive.  Very large and not able to fly, the drones congregated at the hive entrance.  Here, they were attacked by workers, who I watched laboriously drag them away from the colony and into the yard. 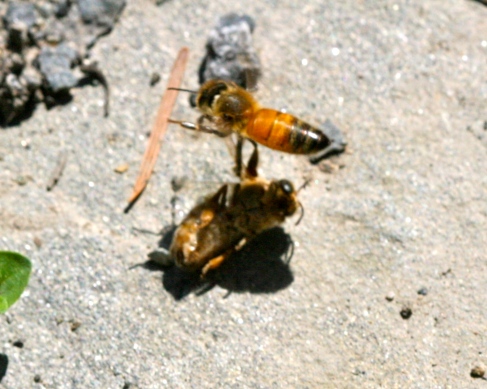 Checking slowly and carefully, our search yielded no queen.  This was confirmation that something had gone wrong!  Did I accidentally squash her on a prior hive check?  Had she not been mated successfully and maybe flew away looking for drones, never to return?  She wasn’t marked and her wings weren’t clipped, so……I suppose that is the $31 dollar question….that’s the amount I will spend getting a new queen shipped PDQ!  She will be off and headed my way on Tuesday.  Hopefully, she will arrive from California by Thursday.

These next weeks are critical as the colony will be hitting a peak time for foraging and my worker population has not built up to numbers needed to take advantage of the blackberry nectar flow, I am going to add in another package of bees.  Maybe there will be success with more workers.

So when they arrive, I will have to “bee-gin” again!  Sort of!  First though, introductions will have to be made.  In order to get the bees I have now to accept the new bees, I will put a sheet of newspaper with some small holes punched in it over the top frames of my deep super.  Then, since I don’t have another deep super, I am planning to stack two shallow supers on top.  This space is where I will install the new package of bees and the replacement queen.  The idea is that in a few days, the bees will chew through the newspaper and by then, everyone smells the same, so they all get along.

Alternatively, instead of newspaper, I could spray both sets of bees with sugar water and just mix them all in together.  I think that the newspaper “get acquainted slowly” method is more likely to be successful.  I was going to sprinkle some powdered sugar for the bees on top of the newspaper too.   The new queen I will leave in her cage and go back and free after a couple of days.  Oh!  I’m also going to put a dot of paint on her if she comes unmarked ( I might even try pink).  It really helps if you’re a new beekeeper to find her more easily.

Will it work?  I’m keeping my fingers crossed.  I’m learning and trying things out and sometimes doing things wrong or having a problem is how you get better at solving things.  It’s all about patience and practice.