Yesterday I decided to tackle some of my beekeeping “stuff” that I’d been putting off.  I saw that it was going to be a nice warm day and needed to look in my beehive and make sure that my bees were doing the things that bees need to do.  It had been 29 days since I’d opened the hive after installing my new package of bees to remove the queen cage.  I had planned to check on them 10 days after that, but with all the cool and damp weather we were experiencing here, I thought it best to just let Mother Nature take her course and leave them “bee!”

I also put on my list a few other tasks that I needed to check off.  One was getting my course of study plan into my department at the University of Florida.  With the completion of my Apiculture class this spring, I am officially half-way through my Entomology masters degree program.  Strangely enough, I am also more aware every day of how little I know.  Seems like you go to graduate school to acquire knowledge about your area of study, but I am constantly reminded of the things I still have to learn.  We are all on a journey and there’s much in life to discover…

So, with my course of study outlined and submitted, I began my next task…filling out my official Washington State Department of Agriculture Beekeeper registration.  I am going to send in my $5 fee plus a late fee of 16 cents and Jenny at the WSDA will send me a “license” for my bees.  About that 16 cent late fee though….The late fee is assessed when you send your registration in after April 1.  Something just seems amiss when I have to pay a late fee and I didn’t even get my bees until April 11.  Jenny was apologetic and very nice.  She said to write to my representative to see if they can change the RCW’s on the books.  She even emailed me those RCW’s so I can reference them when I write to my representative!  Kevin Ranker…you’ll be hearing from me soon.  I want my 16 cents worth of representation 🙂

Going down my list…the sun was high in the sky overhead and my bees were active.   I decided to grab my bee suit and get the smoker going and take a peek.

I’m so glad I finally received my new bee suit.  I ordered it from Blue Sky Bee Supply and used my $75 gift certificate that I won in their Haiku poem contest on Facebook.  Quirky as usual, I ordered mine in Lavender.  My next one is going to “bee” yellow though.  I think that if I painted black stripes on it, then it could double as a Halloween costume.

With my smoker going (I’m getting better at this), I zipped up and got my gloves, hive tool, and my camera.  Surprisingly, I find myself to be extraordinarily calm around the bees.  I was more gentle with my smoker this time.  In the month of bad weather we had, I used my time to read some great beekeeping literature and found out that puffing the smoke too close to the bees can actually burn them.

After a puff or two at the entrance, I cracked the top of the hive just a little and gently puffed a bit of smoke in.  Then I carefully removed the top and laid it against the house (yes, I put my bees right under my teenage daughter’s bedroom window).  I puffed another bit of smoke at the opening of the inner cover and then removed that carefully as well.  I was especially gentle as I leaned it against the top cover since there were a few bees clinging to the inside of the lid.

Next, I removed one of the outer frames.  I don’t have a frame rest yet, so I leaned it carefully in the box I carried my camera and bee tools outside in.  There were only two bees on this frame, so before I set it down, I gently brushed them back in with the others.

Removing the outer frame gave me room to slide the other frames over so that I could remove one near the center where all the activity was.  I pulled one out and looked it over on each side.  There were sealed cells and the brood pattern looked even.  I didn’t see the queen and think she may have been on the next frame over.  The frame I was holding was covered with bees and surprisingly, they were extremely tolerant of my intrusion into their domain.  I snapped a few photos and then decided against looking further when a yellow jacket (THE ENEMY) flew down and tried to land on the frame. 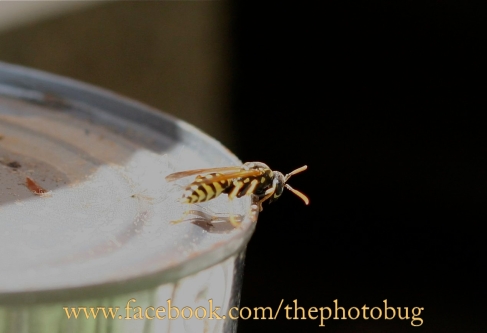 After closing the top, I noticed that the bees quickly resumed the tasks they were busy with before I interrupted their day.  I came inside amazed at how organized they are and how the very last thing on my mind when I was in their midst was getting stung.  Even with my suit on, they weren’t the least bit angry with me and I am beginning to understand the intriguing dynamic that exists between a keeper and her bees.

Yesterday, I was one with the hive…